WASHINGTON: With a solemnity reserved for momentous occasions, the Senate passed historic legislation Thursday offering the priceless hope of citizenship to millions of immigrants living illegally in America’s shadows. The bill also promises a military-style effort to secure the long-porous border with Mexico.

The bipartisan vote was 68-32 on a measure that sits atop President Barack Obama’s second-term domestic agenda. Even so, the bill’s prospects are highly uncertain in the Republican-controlled House, where conservatives generally oppose citizenship for immigrants living in the country unlawfully.

Spectators in galleries that overlook the Senate floor watched expectantly as senators voted one by one from their desks. Some onlookers erupted in chants of “Yes, we can” after Vice President Joe Biden announced the bill’s passage.

After three weeks of debate, there was no doubt about the outcome. Fourteen Republicans joined all 52 Democrats and two independents to support the bill.

In a written statement, Obama coupled praise for the Senate’s action with a plea for resolve by supporters as the House works on the issue. “Now is the time when opponents will try their hardest to pull this bipartisan effort apart so they can stop commonsense reform from becoming a reality. We cannot let that happen,” said the president, who was traveling in Africa. 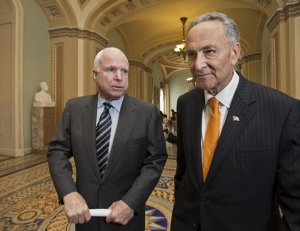 After the bill passed, he called Sen. Chuck Schumer, D-N.Y., a leading author of the bill, to offer congratulations.

In the final hours of debate, members of the so-called Gang of 8, the group that drafted the measure, frequently spoke in personal terms while extolling the bill’s virtues, rebutting its critics — and appealing to the House members who turn comes next.

“Do the right thing for America and for your party,” said Sen. Bob Menendez, D-N.J., who said his mother emigrated to the United States from Cuba. “Find common ground. Lean away from the extremes. Opt for reason and govern with us.”

Arizona Republican Sen. Jeff Flake said those seeking legal status after living in the United States illegally must “pass a background check, make good on any tax liability and pay a fee and a fine.” There are other requirements before citizenship can be obtained, he noted.

He, too, spoke from personal experience, recalling time he spent as a youth working alongside family members and “undocumented migrant labor, largely from Mexico, who worked harder than we did under conditions much more difficult than we endured.