KATHMANDU: Taliban insurgents including a suicide bomber in a truck killed four Nepalis and two other people in an attack on a foreign logistics and supply company in Kabul on Tuesday, police said, according to the news agency Reuters.

Three other employees were wounded in the attack.The Taliban claimed responsibility for the early morning attack in an area in the north of Kabul used by a number of foreign companies supplying NATO forces in Afghanistan.

Violence is escalating across Afghanistan as NATO-led combat troops prepare to leave by the end of 2014. 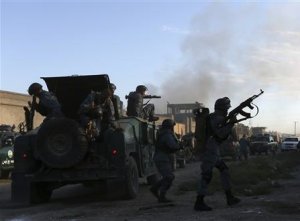 Afghan policemen arrive at the site of an attack in Kabul, July 2, 2013. REUTERS/Omar Sobhani

The attack began when one of the insurgents drove an explosives-laden truck into a vehicle bay in the compound north of Kabul airport, detonating an explosion that left a crater six metres (20 feet) deep and about 15 metres wide.

“It made a hole the size of a pool,” Salangi said.

Three other attackers then engaged in a gunfight with Afghan security forces for up to an hour before they were killed, Salangi said. Three vests packed with explosives were recovered from the scene, he said.

A Reuters witness said he saw the bodies of two people being carried away, although it was not clear if they were those of the attackers or of other victims.

Atiqullah, a 54-year-old truck driver for the company, said at least four co-workers had been wounded in the attack.