SAN FRANCISCO: An Asiana Airlines flight packed with more than 300 people slammed onto the runway while landing at San Francisco airport Saturday and caught fire, forcing many to escape by sliding down the emergency inflatable slides and into a trail of metal debris as flames tore through the plane.

At least two people who were found outside the wreckage died in the crash, while another 182 people were taken to hospitals, many with minor injuries, authorities said. Forty-nine people were reported to be in critical condition, San Francisco International Airport spokesman Doug Yakel said.

As the plane approached the runway from the waters of San Francisco Bay around noon, travelers in the terminals and others eyewitnesses could see that the aircraft was swaying unusually from side to side and that at one point the tail seemed to hit the ground before breaking off.

Kate Belding, who was jogging a few miles away, said she thought: “Oh my God. That plane is crashing.”

By the time the flames were out, much of the top of the Boeing 777’s fuselage had burned away. The tail section was gone, with pieces of it scattered across the beginning of the runway. One engine appeared to have broken away. Emergency responders could be seen walking inside the burned-out wreckage. 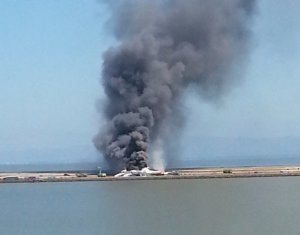 News of the crash spread quickly on Twitter and the Internet in this wired city, with eyewitnesses tweeting their stories, posting images of the plumes of smoke rising above the bay and uploading video of passengers fleeing the burning plane.

“It just looked really bad,” Belding said. “I’ve seen the pictures of it since then, and it’s amazing anyone walked out of that plane.”

The investigation has been turned over to the FBI and terrorism has been ruled out, San Francisco Fire Chief Joanne Hayes-White said. Federal aviation and transportation investigators were heading to the scene. Asiana, Boeing and the engine manufacturer, Pratt & Whitney, pledged to work with them.

Vedpal Singh, who was sitting in the middle of the aircraft and survived the crash with his family, said there was no forewarning from the pilot or any crew members before the plane touched down hard and he heard a loud sound.

“We knew something was horrible wrong,” said Singh, who suffered a fractured collarbone and had his arm was in a sling. 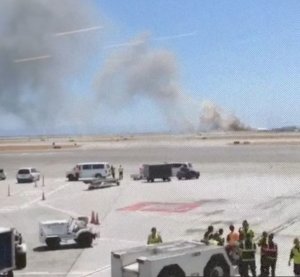 “It’s miraculous we survived,” he said.

A visibly shaken Singh said the plane went silent before people tried to get out anyway they could. His 15-year-old son said luggage tumbled from the overhead bins The entire incident lasted about 10 seconds.

Another passenger, Benjamin Levy, 39, said it looked to him that the plane was flying too low and too close to the bay as it approached the runway. Levy, who was sitting in an emergency exit row, said he felt the pilot try to lift the jet up before it crashed, and thinks the maneuver might have saved some lives.

“Everybody was screaming. I was trying to usher them out,” he recalled of the first seconds after the landing. “I said, ‘Stay calm, stop screaming, help each other out, don’t push.'”

Hayes-White said she did not know the ages or genders of the people who died, but said they were found on “the exterior” of the plane. She said the 307 passengers and crew members had been aboard had been accounted for following several hours of confusion during which authorities said they were unsure of the whereabouts of more than 60 people who, as it turned out, had been evacuated to a different area of the airport. 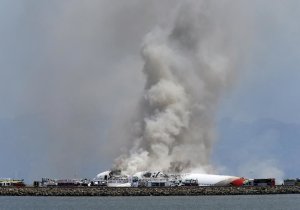 Based on witness accounts in the news and video of the wreckage, Mike Barr, a former military pilot and accident investigator who teaches aviation safety at the University of Southern California, said it appeared the plane approached the runway too low and something may have caught the runway lip — the seawall at the end of the runway.

San Francisco is one of several airports around the country that border bodies of water that have walls at the end of their runways to prevent planes that overrun a runway from ending up in the water.

Since the plane was about to land, its landing gear would have already been down, Barr said. It’s possible the landing gear or the tail of the plane hit the seawall, he said. If that happened, it would effectively slam the plane into the runway, he said.

Noting that some witnesses reported hearing the plane’s engines rev up just before the crash, Barr said that would be consistent with a pilot who realized at the last minute that the plane was too low and was increasing power to the engines to try to increase altitude. Barr said he could think of no reason why a plane would come in to land that low.

Belding was out jogging just before 11:30 a.m. on a path across the water from the airport when she noticed the plane approaching the runway in a way that “just didn’t look like it was coming in quite right.” 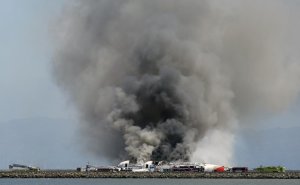 “Then all of a sudden I saw what looked like a cloud of dirt puffing up and then there was a big bang and it kind of looked like the plane maybe bounced (as it neared the ground),” she said. “I couldn’t really tell what happened, but you saw the wings going up and (in) a weird angle.”

“Not like it was cartwheeling,” she said, but rather as though the wings were almost swaying from side to side.

The flight originated in Shanghai, China, and stopped over in Seoul, South Korea, before coming to San Francisco, airport officials said. The airline said there were 16 crew members aboard, and the 291 passengers included 77 South Koreans, 141 Chinese, 61 Americans and one Japanese citizen. The nationalities of the remaining passengers weren’t immediately known.

The airport closed for several hours, and when it reopened, two of the four runways were operating. 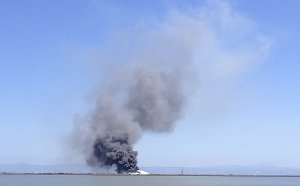 In this photo provided by Scott Sobczak, smoke rises from of Asiana Flight 214 after it crashed at S …

Asiana is a South Korean airline, second in size to national carrier Korean Air. It has recently tried to expand its presence in the United States, and joined the Star Alliance, which is anchored in the U.S. by United Airlines.

The 777-200 is a long-range plane from Boeing. The twin-engine aircraft is one of the world’s most popular long-distance planes, often used for flights of 12 hours or more, from one continent to another. The airline’s website says its 777s can carry between 246 to 300 passengers.

The flight was 10 hours and 23 minutes, according to FlightAware, a flight tracking service. The 777 is a smaller, wide-body jet that can travel long distances without refueling and is typically used for long flights over water.

The most notable accident involving a 777 occurred on Jan. 17, 2008 at Heathrow Airport in London. British Airways Flight 28 landed hard about 1,000 feet short of the runway and slid onto the start of the runway. The impact broke the 777-200’s landing gear. There were 47 injuries, but no fatalities.

An investigation revealed ice pellets that had formed in the fuel were clogging the fuel-oil heat exchanger, blocking fuel from reaching the plane’s engines. The Rolls-Royce Trent 800 series engines that were used on the plane were then redesigned. 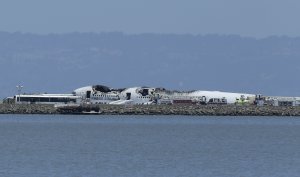 Bill Waldock, an expert on aviation accident investigation, said he was reminded of the Heathrow accident as he watched video of Saturday’s crash. “Of course, there is no indication directly that’s what happened here,” he said. “That’s what the investigation is going to have to find out.”

The Asiana 777 “was right at the landing phase and for whatever reason the landing went wrong,” said Waldock, director of the Embry-Riddle Aeronautical University accident investigation laboratory in Prescott, Ariz.

“For whatever reason, they appeared to go low on approach and then the airplane pitched up suddenly to an extreme attitude, which could have been the pilots trying to keep it out of the ground,” he said.

The last time a large U.S. airline lost a plane in a fatal crash was an American Airlines Airbus A300 taking off from John F. Kennedy International Airport in New York in 2001.

Asia remains one of the fastest-growing regions for aviation in the world. Even with slowing economies in Japan and China, airlines there saw 3.7 percent more passengers than a year ago, according to the International Air Transport Association. 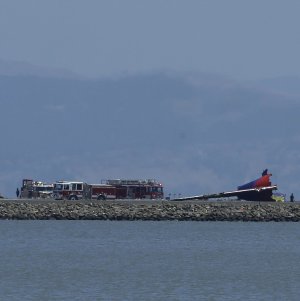 The tail of Asiana Flight 214 is seen, right, after it crashed at San Francisco International Airpor …

Finding enough experienced pilots to meet a growing number of flights is becoming a problem. A 2012 report by aircraft manufacturer Boeing said the industry would need 460,000 new commercial airline pilots in the next two decades — with 185,000 of them needed in Asia alone.

“The Asia-Pacific region continues to present the largest projected growth in pilot demand,” the report said.