Murray won the title with a 6-4 7-5 6-4 triumph against world number one Novak Djokovic on Sunday.

“I can’t think of anyone who deserves one more,” said Mr Cameron, who watched the match from the Royal Box.

But Murray said: “It’s a nice thing to have or be offered but I don’t know if it merits that.” 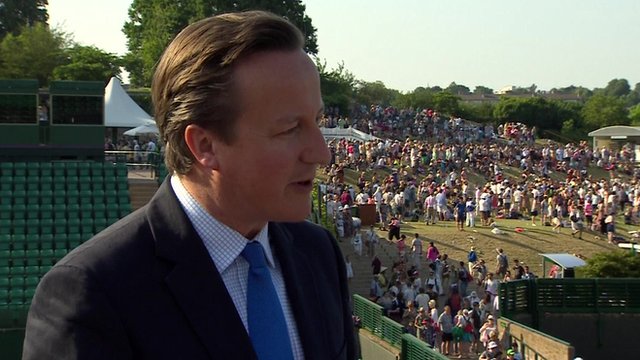 Mr Cameron said Murray’s win had “lifted the spirits of the whole country”.
“It was a fantastic day for Andy Murray, for British tennis and for Britain,” he added.

“We were wondering on Sunday morning, ‘do we dare to dream that this is possible?’ and he proved absolutely that it was.”

The prime minister cannot personally award an honour to the 26-year-old, stressing that they are decided independently.

People are nominated for their achievements by members of the public and whether they are given an honour – and the type of honour – is decided by a committee.

The committee’s decision goes to the prime minister and then to the Queen.

Murray was awarded an OBE in the 2013 New Year’s Honours list after winning Olympic gold and the US Open last year.

On the possibility of receiving a knighthood, the Scot added: “I think just because everyone’s waited for such a long time for this [winning at Wimbledon], that’s probably why it will be suggested.”

In the first of several interviews on Monday, Murray told BBC Breakfast that he had only slept for “about one hour” after his victory.

“You don’t want to go to sleep in case you wake up and it hasn’t actually happened,” he said.

Murray later took part in a question and answer session on social networking site Twitter, ahead of attending promotional events for his sponsors. Murray is due to meet Mr Cameron about 16:00 BST in a special reception at Downing Street.

The Queen has awarded knighthoods to several sportsmen in recent years, including Olympic-winning cyclist Sir Bradley Wiggins in 2013 and former Manchester United manager Sir Alex Ferguson in 1999.Paralympic cyclist Sarah Storey was also made a dame in the 2013 New Year’s Honours list.

“All of our clubs and local authorities have been working very hard to make sure tennis is open, accessible and very cheap,” he told BBC Radio 5 live.

“Now we’re encouraging people – not only on the Wimbledon fortnight – to get down to the tennis courts and give the game a go.”

“He’s come into his own and there’s a lot to look forward to,” said the American.

Murray’s win against Djokovic was watched by a peak audience of more than 17m viewers on BBC One.

The Dunblane-born player dedicated the triumph, which earned him prize money of £1.6m, to his coach Ivan Lendl. The American-Czech, 53, won eight Grand Slam titles as a player in the 1980s and 1990s, but failed to win the Wimbledon men’s singles.

Kathmandu, Aug 5 : Bikas Malla has been designated the goalkeeper coach of the Nepali