DAMASCUS, Syria: Muslims began observing the dawn-to-dusk fast for the month of Ramadan across the Middle East on Wednesday, even as the region is shaken by the crisis in Egypt and the U.N. food agency warned that Syria’s civil war has left 7 million people in need of food aid.

Ramadan this year comes during the harsh Mideast summer, and governments in the region took steps to help alleviate the fast, offering shorter working hours, promising less power cuts and even distributing food to weary motorists.

The Muslim lunar calendar moves back through the seasons, so Ramadan starts 11 days earlier each year under the Western calendar.

For most Sunnis and Shiites, Ramadan started on Wednesday while others are expected to begin observing the holy month on Thursday — differences based on various interpretations of sightings of the new moon.

Despite its apparent harshness, many Muslims eagerly anticipate Ramadan, the month when they believe God revealed the first verses of the Muslim holy book, the Quran, to the Prophet Muhammad. Streets are decorated with colorful lanterns, families feast together at night, the devout pray even more and regional cooking shows obsess over new takes on classic dishes for the Ramadan evening meal that breaks the daytime fasting. 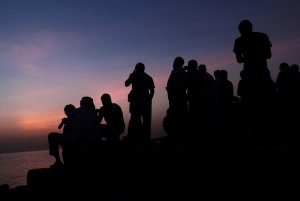 But the hardships in Syria, where the civil war is now in its third year, have eroded much of the Ramadan joy.

On Wednesday, the World Food Program said it needed $27 million every month to deal with the growing ranks of Syrians made hungry because of the war. If the organization did not provide for them, “they simply will not eat,” said Muhannad Hadi, WFP’s emergency coordinator in Syria.

Syria’s conflict erupted in March 2011 as an Arab Spring-inspired uprising against President Bashar Assad’s regime. It has since descended into a civil war that has killed over 93,000 people, displaced over 5 million and turned over 1.5 million into refugees, according to U.N. figures.

“People come by the kitchen just begging for scraps, it tears the heart,” said an activist in the rebel-held northern Syrian city of Maarat al-Numan.

The activist, who identified himself only by his nickname, Abu Anas, fearing for his own safety, said rebel activists were using a communal kitchen to distribute a simple Ramadan evening meal of rice, vegetable stew and soup to some 400 of the town’s neediest families. 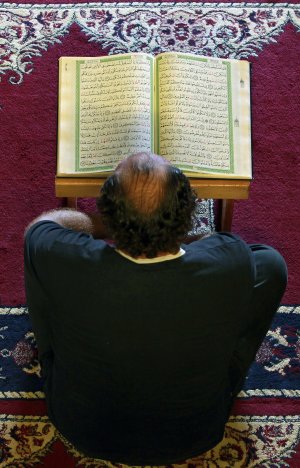 A Lebanese man reads a Quran, the Muslim holy book, at a mosque in Beirut, Lebanon, Wednesday, July  …

Food prices have risen five-fold in Syria over the past months and shortages in fuel are widespread. Farmers have abandoned their fields, setting the stage for a broader disaster next year, the WFP has warned.

The Syrian currency fell further, to 280 pounds for one U.S. dollar on Wednesday, after recovering from a record low of 310 pounds to the dollar on Tuesday. The falling pound is likely to further push up prices.

“I can’t buy necessities anymore,” lamented Qassem al-Zamel, a 37-year-old employee in Damascus. “”Yesterday, I bought 2 kilograms of potatoes, one kilogram of beans and two kilograms of tomatoes with 1,000 pounds. I stopped buying meat.”

Supermarket owner Adib Mardini, 62, said he was changing food prices by the hour on some days but there were few shoppers around. “People have run out of money,” he said.

By contrast, police in the oil-rich Gulf Emirate of Abu Dhabi planned to distribute nearly 30,000 sunset meals to drivers at gas stations or traffic lights in an attempt to prevent traffic accidents by speeding motorists rushing home for iftar, the meal that breaks the fast. 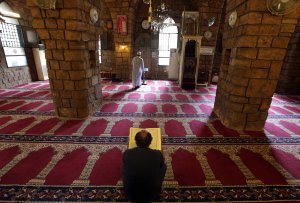 Lebanese men pray and read the Quran, the Muslim holy book, at a mosque in Beirut, Lebanon, Wednesda …

In the Palestinian territories, the local self-government reduced the working day to five hours. The Palestinian minister of religious affairs, Mahmoud al-Habbash, said this would give people enough time for worshipping God.

“People, who spend long parts of the night praying …. should be given enough time to have some sleep in the morning,” said Mahmoud Al-Habbash.

In Egypt, where the military deposed Islamist President Mohammed Morsi last week following days of massive protests against his rule, the new interim leader called for reconciliation in Ramadan, traditionally a period for Muslims to promote unity.