LAS VEGAS: Fire crews burned forest undergrowth near homes in the mountains northwest of Las Vegas to protect them from one of two large Nevada wildfires while local casino owners offered rooms to evacuees.

“They’re working very, very hard, but the progress we were making was erased yesterday,” Senate Majority Leader Harry Reid, D-Nevada, said Wednesday morning in remarks from the Senate floor. “I’ll do everything that I can to ensure that every federal resource that’s available will be made available to support local officials and fire crews.”

In northern Nevada, more than 1,060 firefighters worked to stem the spread of a bigger but more remote wildfire that grew Monday to 40 square miles in the Pine Nut Mountains southwest of Reno. Lyon County sheriff’s deputies went door-to-door to ask people to evacuate Pipeline Canyon.

No homes have been lost in either fire, but fire officials said containment may not come on either fire until next week. 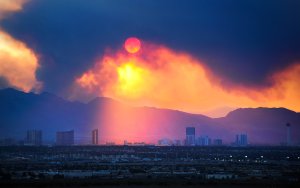 Fires were also burning across the West in California — where 100 mountain cabins were destroyed and 120 homes remained threatened in San Diego County — and in Alaska, Idaho and Arizona.

In Arizona, a memorial service was held Tuesday in Prescott for 19 members of a Hotshot crew killed June 30 while fighting a wildfire near Yarnell north of Phoenix. Speakers included the lone surviving crew member and Vice President Joe Biden.

In southern Nevada, no homes have been damaged and none of 800 firefighters has been injured battling the 31-square-mile Carpenter 1 fire on Mount Charleston, U.S. Forest Service spokesman Jay Nichols said. Officials said the fire was about 10 percent contained, down from 15 percent on Tuesday.

One portion of the blaze “bumped” the edge of state Route 157, threatening to cut off the main highway in and out of the evacuated Kyle Canyon area some 25 miles outside Las Vegas. No homes were nearby, Nichols said.

Smoke billowing from the lightning-sparked blaze was visible for an eighth day from Las Vegas, where brown haze stretched northeast of this city of 2 million and fine white ash fell in communities north and west of downtown. The Clark County Department of Air Quality issued a health advisory that officials said would remain in effect through Sunday. 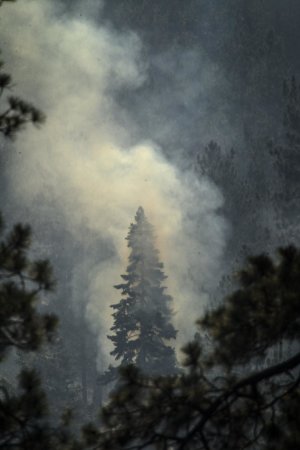 Smoke from the Carpenter 1 Fire as seen on Tuesday, July 9, 2013 at Cathedral Rock Picnic Site on Mt …

The Federal Emergency Management Agency has promised to reimburse Nevada for 75 percent of the cost of fire suppression. Federal Bureau of Land Management spokeswoman Hillerie Patton said Tuesday that the cost was approaching $5 million.

Officials said more than 500 residents have been unable to return to homes in Trout, Kyle, Lee, Harris Springs and Lovell canyons since the weekend. Another 98 teenagers remain evacuated from a Clark County youth correctional camp.

Several local casino companies teamed with the American Red Cross of Southern Nevada to provide hotel rooms to evacuees, and the Nevada Restaurant Association worked with the Red Cross to provide meals for firefighters working to protect about 400 mountain homes.

Cannery Casino Resorts executive Xavier Walsh said his company was willing to provide up to 40 rooms for the 10 days that fire managers said families might be displaced.

In northern Nevada, the 40-square-mile Bison Fire straddled the Douglas and Lyon county lines near Gardnerville and Carson City. It doubled in size Monday but stabilized Tuesday. Containment was reported at 25 percent. 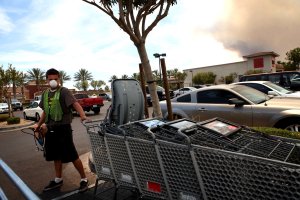 Jason Moore, 17, wears a mask protect to himself from the smoke produced by the Carpenter 1 fire, se …

Douglas County commissioners declared a state of emergency to enable the county to seek more state and federal assistance.

Ross put the cost of battling the fire since it was sparked by lightning July 4 at about $3.5 million.

In other wildfires burning in the West:

— In Arizona, residents were allowed to return Tuesday to about 100 of the 200 homes evacuated due to a wildfire in Kearny, located 73 miles southeast of Phoenix. The fire has burned about 300 acres of dense vegetation and one house since Monday. It was 5 percent contained. 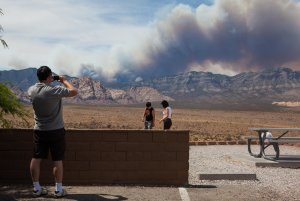 — In Southern California, a wildfire burned more than 100 cabins at a Shriner’s International mountain camp near Julian, 60 miles east of San Diego in the Cleveland National Forest. The 7.3-square-mile fire was 15 percent contained but threatens evacuated campgrounds and about 120 homes, mostly vacation cabins, officials said Tuesday.