The bodies were found about 100 to 200 yards apart and a 35-year-old man was arrested and is a suspect in all three deaths, although he has not yet been charged, Norton said late Saturday.

The suspect is a registered sex offender and has served prison time, the mayor said. In police interviews, the man led them to believe he might have been influenced by convicted serial killer Anthony Sowell, Norton said in an interview with The Associated Press.

“He said some things that led us to believe that in some way, shape, or form, Sowell might be an influence,” the mayor said.

Sowell was found guilty in 2011 of killing 11 women and hiding their remains around his Cleveland home. He was sentenced to death and is in an Ohio prison.

Asked if the suspect has a fascination with the Sowell case, the mayor said: “We believe so.”

Police Commander Mike Cardilli said a woman’s body was found Friday in a garage and two other bodies were found Saturday — one in a backyard and the other in the basement of a vacant house.

All three people are believed to have been killed in the last six to 10 days. 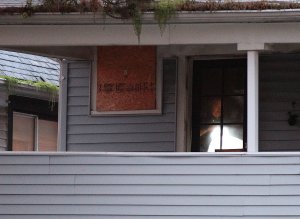 A investigator looks through a boarded-up house on Shaw Ave. near the location where bodies were found.

Norton said the bodies were each in the fetal position, wrapped in several layers of trash bags. He said detectives continue to interview the suspect, who used his mother’s address in Cleveland, the mayor said, in registering as a sex offender.

Cardilli said the man was arrested after a standoff with police Friday. Police did not immediately release the suspect’s name. He was jailed in East Cleveland, the mayor said.

“The person in custody, some of the things he said to investigators made us go back today,” the mayor said.

Police searched vacant houses over about three blocks in the neighborhood Saturday and planned to expand their search Sunday, Norton said.

The Plain Dealer reported that police, the FBI, the Ohio Bureau of Criminal Investigation and the Cuyahoga County Sheriff’s Department went through yards and abandoned houses and used dogs trained to find cadavers.

The neighborhood in East Cleveland, of some 17,000 residents, has many abandoned houses and authorities want to be thorough, the mayor said.

Around 300,000 people displaced after deadly blast in Beirut: Governor

Lebanon, August 5 : Around 300,000 people became homeless as a result of the recent

WASHINGTON, July 11:The United States recorded 63,643 new coronavirus cases on Friday, according to a

With a spike of 22,252 cases, India’s COVID-19 count breached the seven lakh mark and

Japanese Govt. Conferred the ‘Grand Cordon of the Order of the Rising Sun’ medal to Former Minister Pandey

Jhapa, Feb 17 : Minister for Culture and Tourism Bhanubhakta Dhakal has claimed the step