Philippines: Philippine officials said Monday they will make sure that an increased presence of U.S. troops in the country does not become permanent and is meant to help the Philippines modernize its military, which is being challenged by China in territorial disputes in the South China Sea.

Philippine and U.S. officials will open talks Wednesday in Manila on an accord to increase rotations of American troops, said chief government negotiator Carlos Sorreta. Hundreds of American troops already have been stationed in the volatile southern Philippines for counter-terrorism training since 2001. The new agreement is expected to increase their numbers and allow them to preposition equipment, officials said.

At a news conference, Foreign Secretary Albert del Rosario and Defense Secretary Voltaire Gazmin presented the Philippines’ negotiators, who will meet with the Americans. They did not mention China by name but have repeatedly stressed in the past that their country needs to upgrade its military to defend its territorial waters in the South China Sea, which Beijing claims virtually in its entirety.

“Our region needs to know that we are steadfastly for peace,” del Rosario said. “But that we stand ready to tap every resource, to call on every alliance, to do what is necessary, to defend what is ours, to secure our nation and to keep our people safe.”

Gazmin said the wider U.S. presence will not be permanent and will comply with the constitution, which bans the basing of foreign troops. It would also mean more resources and training for responding to disasters in a nation often battered by typhoons and earthquakes. 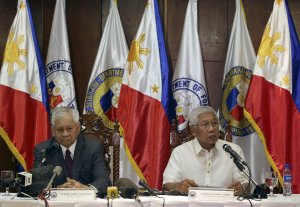 The presence of foreign troops is a sensitive issue in the Philippines, a former American colony. The Philippine Senate voted in 1991 to close down major American bases at Subic and Clark, near Manila. In 1999, it ratified a pact with the United States that allows temporary visits by American forces, paving the way for hundreds of U.S. forces to hold combat exercises with Filipino troops and training them in battling al-Qaida-linked militants in the south.

Simmering territorial tensions in the South China Sea have since shifted the focus on the Philippines’ poorly guarded maritime frontiers. Last year, China took control of a lagoon off the northwestern Philippines, which Manila says falls within its 200-mile (322-kilometer) exclusive economic zone. China also has demanded that the Philippines pull out of another shoal farther south, near Mischief Reef, which Chinese troops occupied in 1995 amid Manila’s protests.

The U.S. says it takes no sides in the disputes but has backed the Philippine approach to seek U.N. arbitration and a wider regional agreement. China has criticized the Philippines for escalating the disputes and warned against any outside intervention. Several of China’s neighbors have been alarmed by Beijing’s recent assertiveness in claiming large areas of the South China Sea.

Manila’s desire to bolster its external defense and security has dovetailed with Washington’s intention to pivot away from years of heavy military engagement in the Middle East to Asia, where it has been fostering closer economic and military alliances with countries such as the Philippines, partly as a counterweight to China’s rising clout.

The realignment of American forces in the Asia-Pacific also involves the deployment of up to 2,500 U.S. Marines in northern Australia and the stationing of U.S. combat vessels in Singapore.

Gazmin has said that additional American troops would only be allowed access to existing Philippine military bases. The two sides have to negotiate the length of any agreement allowing more U.S. troops, planes, ships and other equipment.